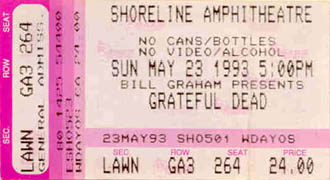 Jack Straw, Loser, It's All Over Now, Just Like Tom Thumb's Blues, Bird Song, The Music Never Stopped Iko Iko, Wave To The Wind, Saint Of Circumstance, Terrapin Station-> Drums-> Jam-> I Need A Miracle, The Days Between-> Not Fade Away, E: Lucy In The Sky With Diamonds

like has been said before me, i would agree that SOME of the best moments were in the first set, and that is a departure from alot of shows around this time. the "jackstraw" opens slow, but jerry's notes towards the end told us that his chops were up to speed this day.
the "loser" is played AND sung well, which was a real treat. the "tom thumbs" and "its all over now" dragged a bit, but the 15 minute "bird song" and 10+ minute "music never stopped" more than made up for it and featured some WONDERFULLY creative playing from jerry.
when jerry was healthy and capable i believe the late 80's and early 90's to be his best years in terms of his playing. quite simply, a quarter CENTURY of practice came out when he had anywhere NEAR the enthusiasm to match the knowledge and creativity. in addition, the REST of the band was playing wonderfully around this same time.

as for the second set, it didnt reach the crazy peaks of the sunday prior, but it was also far from lackluster. a decent "iko" start goes to phils "wave to the wind", and while none of us were too keen on hearing that tune (why DID any of us chant "we want phil" if not for comedic value or the hope of an "unbroken chain"?) it was played well. bob then leads us into a VERY nice "saint" which leads to the expected (but not disappointing) "terrapin". bob's post drums "need a miracle" got the crowd going, and then jerry sang his heart out on "days between". one of the most haunting and beautiful versions ive ever heard, and a song (along with "so many roads") that never failed to bring out the best vocally from the older jerry.

"not fade away" was also no surprise but well played, and the crowd was in perfect unison singing along before band and crowd had one more "together" moment as jerry sent us home to the beatles tribute to the acid era in "lucy in the sky".

not the longest or most creative show i ever saw, but well played throughout.
4 star show with 5 star sound. round up because.....well, because its the dead. :)

so what if shoreline is landfill. it's such a fun place.
Reviewer: budfox - favoritefavoritefavoritefavorite - April 26, 2005
Subject: Another Hot 1st Set
The Loser is ridiculous. One of my favorite versions . Phil is Carpet Bombing and Vinces vocals are great during the Chorus. Garcias solo is stripped down and raw. His solo on Tom Thumbs is not much but he more than makes up for it with choice licks throughout. Bird Song is Powerful with Garcia playing the intro for a least a minute. Garcia realy sings well and the Band goes in some really nice exploriation. Vince synth tones are bid too much. Vince and Jerry both are cooking on the Music Never Stopped. The ending is sick. Once again the best moments are contained in the first set. Sound is amazing download for the Loser and the Toms Thumbs-BirdSong- Music Never Stopped. 4 stars is for 1 set only